Finding independence with the support of the NDIS, family and LiveBetter.
Listen Wagga Wagga local Kristen Michael is just like any other person, with goals and dreams to achieve. In her thirties, she’s had a good life and is very fortunate to be surrounded by a lot of love from her devoted family and friends.

High on Kristen’s goal list was to participate in that quintessential Aussie rite of passage to move out of home with friends. About a year ago, with long-time good friends Kellie Parker and Michelle Hockings, said they wanted to live in a house together, so they could increase their independence.

Doesn’t sound that unusual does it, however these women faced more roadblocks than usual. And, just because they each had a disability and two of them use wheelchairs to get about, their roadblock was that it simply hadn’t been done before in the way they wanted it to be. Being able to choose your housemates is a given for most adults, but before the National Disability Insurance Scheme (NDIS) was rolled out, people with a disability did not necessarily have that choice.

For starters, Kristen had been on a waiting list for a Wagga group home for almost four years. She had previously been in a group home an hour and a half away, but she wanted to live closer to her parents. However, there was nothing available for her. That’s why her parents looked at sinking their superannuation funds into building her a home a purpose-built four-bedroom home so the three women could live there independently and have on-site 24-hour support, too.

Kristen’s parents Elaine and Brian Michaels weren’t sure how to get the project started under the NDIS. Then they found LiveBetter Community Services, the best-fit organisation to help kick start the project and to manage the yet-to-be-built home. It was important to ensure there would be around-the-clock care for their daughter and her housemates.

Elaine says LiveBetter encouraged the family and supported them on their building project to ensure accessibility. The Michaels sought advice from Liveable Housing Australia to ensure the house complied with Specialist Disability Accommodation (SDA) regulations and engaged local Wagga builder Phil Baskerville to build the home. It would be fair to say the project touched the heart of everyone involved, from the carpenters and plasterers to the landscapers putting the finishing touches on the outside of the house. Elaine says: “Kristen deserves to have the same sort of opportunity that any other able-bodied person her age would have. We liked LiveBetter’s personal, flexible and attentive approach.”

Kristen and her friends have become strong, independent women who are determining their own lives. All three are learning more independent living skills in their home, and in Kristen’s case she is learning to manage stress better. Kristen helps prepare her lunch and morning tea when she’s off to day program, folds laundry and does menu planning with her housemates and support workers. She swims, volunteers at LiveBetter’s Wagga office and the local Vinnies’ shop (phew!).

As these independent women continue their lives the way they want to, it begs the question – what status quo will they challenge next?

URL copied for sharing!
Contact us to find out how we can support you or a loved one.
Contact our team 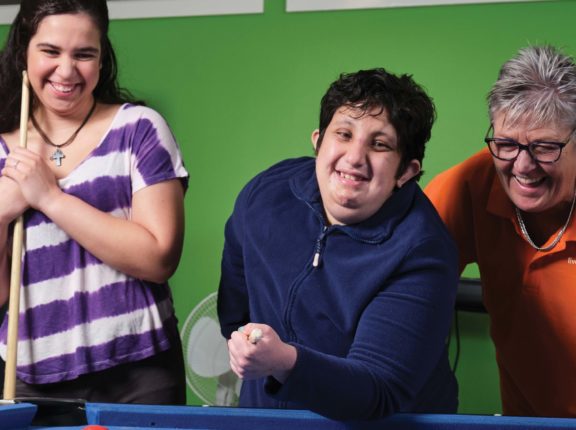 LiveBetter celebrates diversity and female empowerment with Through my Eyes Exhibition

Self-portraits by women with disability creating pathways for social change Broken Hill sparkles with the Glitz and Glamour Ball

Never has there been so many sequins and sparkles in town since Priscilla, Queen of the Desert, made her grand entrance in 1994! Panthers versus Knights? More like the Storm versus Thunder!